How messy play NOW can clean up his act LATER!

Written by Lynette van Wyk on August 3, 2009. Posted in Playing. 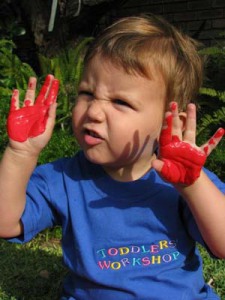 How many of us say: “Let me see!” and then stretch out our hands to touch an object? We are all dependent on our tactile sense to interpret and engage with the world around us and to respond appropriately to touch sensations.

The tactile system is the first sensory system to develop in the womb and develops from the same embryonic layer as the nervous system. It is able to function effectively when the visual and auditory systems are just beginning to develop. The skin thus plays an important role in regulating our nervous system, i.e. making us more alert or calming us down. It affects our ability to learn as well as our emotional and social well-being. This stresses the fact that without a great deal of tactile stimulation of the body, the system tends to become unbalanced.

An impaired and unreliable tactile system can impede social relations, emotional security and academic learning. The child may not be able to tolerate or focus on people and things in his world as he is constantly on alert against all of the tactile input in his environment, i.e. the feel of the hard chair he is sitting on or the air current blowing through the room. He may struggle to concentrate on school work because his filtering system is not screening out the bumps on the pencil or the hard edges of the paper. The constant awareness of the seams in his socks or the feel of the clothes on his body may lead him to the point of distraction. He may dread and avoid art projects that include finger-painting and clay. This child will avoid standing in close proximity to others as the slightest accidental bump from another person may feel like a threat. Lashing out and hitting others may be interpreted as impulsive behaviour when it is actually an act of self-defence. Conversely, the child who does not perceive tactile information at normal intensities may develop clingy behaviours and may touch or mouth everyone and everything in the environment. Signs of an unbalanced system can be picked up early when the infant for instance arches his back in response to being held, or has trouble with sucking or rooting or delayed motor milestones.

In an anti-bacterial, clinically clean, no mess no fuss world we live in, it might pay to make more mess and fuss less!

On the 25th of August, Toddler’s Workshop will be hosting a workshop aimed at showing parents how to stimulate and enhance tactile development in their young ones. Please join us at 39 Brewer Rd, Summerstrand, or contact Lynette van Wyk (Toddlers’ Workshop 0837933320) or Madri Hammond (Occupational therapist, tel. 084 806 1575).

This site uses Akismet to reduce spam. Learn how your comment data is processed.