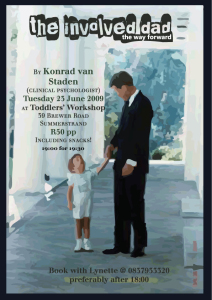 We live in a world where parenting is receiving so much focus. It seems to be the topic of many talk shows and magazine articles. We even have entire magazines focused solely on parenting. But most of the issues of parenting are focused on the mother-child relationship with little emphasis on the role of the father. Our society puts so little worth on the role of the father, sometimes seeming blind at the expense our children are suffering for absent fathers. The consequence of absent and non-involved fathers carries weighted consequences.

A recent analysis of child abuse cases in a nationally representative sample of 42 counties found that children from single-parent families are more likely to be victims of physical and sexual abuse than children who live with both biological parents. Compared to their peers living with both parents, children in single parent homes had:

Children from absent father households are more likely to suffer from physical ailments, antisocial behaviour and be exposed to socially maladaptive interpersonal behaviour. In a study of INTERPOL crime statistics of 39 countries, it was found that single parenthood ratios were strongly correlated with violent crimes. This was not true 18 years ago.

Fathers have an important role to play when involved in the relationship with the mother and as involved prospective fathers. According to a US study, expectant fathers can play a powerful role as advocates of breastfeeding to their wives. Three-fourths of women whose partners attended a breastfeeding promotion class were found to initiate breastfeeding.

As fathers we live in a difficult society where we are forced to work longer hours, with more pressure, and less emphasis on family activities. Men are rewarded for sacrificing parental time for corporate time. So, we spend less time with our children. We are told that it is quality time that matters, but what is this quality? Fathers need to be involved fathers. This means they need to be interested, consistent and engaged in doing things with their child.

But this is not enough. Fathers need to look at the roles they play in their child’s life. Too many fathers will “spend time” with their child playing computer games, taking them to a play park or give them a handful of tokens and send them off to the mall games room. It is important for the psychological growth and self-worth of your child to be in close, touching, communicating mode with him or her. For a child a father’s touch is so important. It is different from the mother’s touch- rougher, stronger and firmer. The father’s touch and hold creates a sense of difference and confidence to the child, which aids in the child’s sense of adventure and security in venturing out into the world with confidence.

It is important for fathers not to sit on the sidelines, but to be involved in the life of the spouse and the family; to be seen to interchange roles with mother and also cook, change nappies and nurture the child. This carries an important message of respect, balance and responsibility to the child, which will define how a child creates human relationships and self-respect as an adult.

The focus should not be on quality or quantity in relationships with children, but on the involvement in the lives and communication with our children. Even for the divorced parents it becomes more important to be involved, rather than spend much time, but be hardly involved with their child.

As parents, and especially mothers, both old mothers and new mothers, we have an important role to play in promoting the involvement of the father in the life of the child. Mothers of young children, divorced mothers and those living with their partners, and even mothers who have become grandmothers to their son’s child have an important role to guide and encourage the father’s role in the home and child’s life. They need to encourage them to take part in sharing child-rearing responsibilities in the home; to spend time alone with each child each week to build a strong and unique bond; and spend time in activities that makes them talk and look at each other (a simple, yet neglected way of spending “together” time).

The one thing we are able to do to improve our society and build the psychological and even physical well being of our children, is to spend time in their lives, to be involved fathers. In doing so, we might find that instead of spending our time on other important activities, it is the one thing that creates the greatest satisfaction and joy in our own lives.

Konrad van Staden is a Clinical Psychologist in private practice at Intercare Medical Center at King’s Court in Buffelsfontein Road, Walmer. At both Weskoppies Hospital in Pretoria and in his current practice he has worked with adults, couples and children. He may be reached at Intercare on 041-395 9600 or 082 564 1071.

This site uses Akismet to reduce spam. Learn how your comment data is processed.